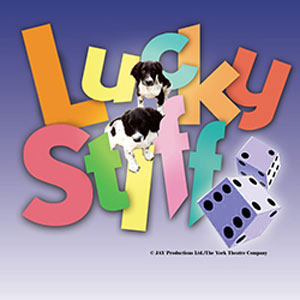 "...A corpse, dogs, a heart-shaped box, and diamonds are just a few of the plot ingredients in the merry mix of mayhem and misadventure in the zany musical Lucky Stiff now being presented at the NextStop Theatre Company. An audaciously frenetic and chaotic sense of impending disaster fills the air as a series of coincidences, mistaken identities and misconstrued intentions all collide and converge in this witty and hilarious book by Lynn Ahrens. The race to see who collects millions is the incentive for an engaging group of whacky yet endearing characters."

"...The idea of a woman passionately pleading with a man wheeling his uncle's corpse around in a wheelchair, singing to him on behalf of all the mistreated dogs in Brooklyn whilst in the middle of a high-speed, high-stakes chase for six million dollars is, perhaps, why many people tend to label musical theater as "unrealistic." But thankfully, seemingly on behalf of theatergoers who are looking for an old-fashioned, madcap night of pure fun, Lucky Stiff makes a scene so ludicrous the mere tip of the iceberg."