John Proctor is the Villain Reviews 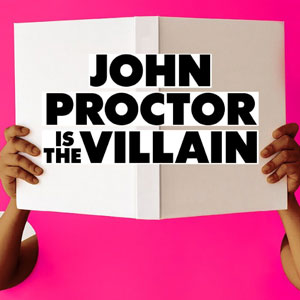 John Proctor is the Villain

"...Never underestimate the importance of a dancing teenage girl. The smart, wary high-schoolers in Kimberly Belflower's inspired "John Proctor Is the Villain," now in a world-premiere run at Studio Theatre, may look as if they're just bopping around to the music of Lorde and Taylor Swift. But their moves - and gripping, funny talk - cast light on urgent social concerns, from the patriarchy's grip to the implications of #MeToo, to widespread deficits of trust. And if the kids can blow off some steam in the process, that's a plus."

"...Belflower's writing both builds tension and allows the characters to develop, with moments where giddy joy (the girls occasionally break into popular songs) bleed into difficult situations where what's true to one person may not be to another. The younger cast members especially form a solid ensemble, with Sass getting the most dramatic individual moments."

"...John Proctor Is the Villain, receiving its world premiere in the Mead Theater at Washington's Studio Theatre, takes a sharp and entertaining look at modern high school students and how they-influenced by their own experiences-comprehend two earlier eras: the 1690s in Salem, Massachusetts, and the 1950s McCarthyism that inspired Miller to write his play. Playwright Kimberly Belflower sets out the conflicts and mixed messages and, most importantly, provides opportunities for all nine characters to share their viewpoints."

"...John Proctor is the Villain is not a complicated story. You won't walk out of its world premiere at Studio Theatre wondering what happened. But that doesn't mean it's not thought provoking and provocative. It's also a story we're all familiar with: The Crucible, coming of age teenagers, and women accused of lying about sexual assault."

"...I can say, without qualification, that this is one of the most thought-provoking and conversation-provoking shows I have seen in recent memory. It's also cracking good theater, to which the audience responded enthusiastically. Add it to your "must see" list."

"...Far from the psychedelic, sexualized fantasies of "Euphoria" or "Riverdale," the nuanced and relatable teenagers of "John Proctor is the Villain" are a rare pleasure. Moving fluidly between humor and dread, this play will remind you how slow progress has been since #MeToo caught a storm in 2017 while also creating satisfying moments of catharsis. With questions of women rights once again in the headlines, "John Proctor is a Villain" is a timely commentary on gender politics, framed through the experience of young women. Catch this riveting play at Studio Theatre while you can and invite the teenagers in your life to join you!"