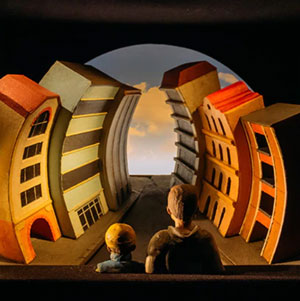 "...Although Emanuel's streamlined script cuts some corners, particularly when it comes to unpacking an upsetting moment of sexual violence, "Flight" potently portrays the trauma and tragedy refugees endure in hopes of obtaining the simple comforts many take for granted. The story also converts its magical realism into lyrical allegory and raises poignant questions about the nature of refugee identity."

"...Every seat is the best seat in the house for the 25 or fewer patrons at each performance of Flight at the Studio Theatre. Like travelers at a friendly border crossing, audience members pass through multiple checkpoints entering the venue's Stage 4, awaiting take-off in a spacious waiting room."

"...Originally commissioned by the Edinburgh International Festival, Flight has toured internationally and was named one of the most Unforgettable Theatre Moments by the New York Times in 2018. Flight is a kind of hybrid - a theatre piece as well as an installation. It was created by Scottish theater company Vox Motus, adapted by Oliver Emanuel, and directed by Candice Edmunds and Jamie Harrison."