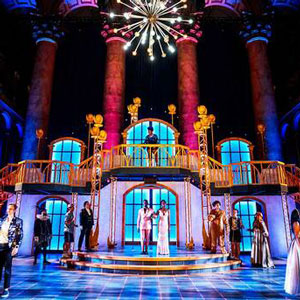 "...This week, Folger's staging of "A Midsummer Night's Dream" at last begins performances at the National Building Museum as part of a museum-wide theatrical experience called "The Playhouse." But while the production has been years in the making - using a temporary stage and seating that have been set up in the museum's Great Hall - audiences will experience an altogether different interpretation of William Shakespeare's magical comedy than what the original creative team dreamed up."

"...Cheerfully energetic but not quite their typical richly-conceived fare, the Folger Theatre's A Midsummer Night's Dream has its moments - just not quite enough of them."

"...Folger Theater's A Midsummer Night's Dream is majestic and enchanting. This production, produced in the monumental National Building Museum, gives a breath of fresh air to this classic tale. Any worries about the show being swallowed by this ambitious venue drift away as audiences are immersed into the story walking through 'The Playhouse' into their seats. Director of scenic design and creator of 'The Playhouse', Tony Cisek along with Yael Lubetzky, lighting designer, create a space that blends worlds seamlessly."

"...Nevertheless, there was never a moment during Folger Theatre's production that I was not entertained. With a script that has been edited down almost ruthlessly, a cast that is both talented and hilarious, and a stunning and ethereal production design, this version of "A Midsummer Night's Dream" is made for anyone including, and especially for, those who still associate Shakespeare with those dull plays they had to read in high school."