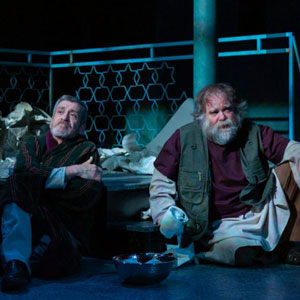 Two Jews Walk Into a War...

"...Ideally, "Two Jews Walk Into a War" would have provided some more expressively bitter taste of what's going on outside the synagogue, some inkling of what Zeblyan and Ishaq are up against. Perhaps then, in that wonderfully contrarian way, we'd have a better idea of why they've stayed."

"...While I was excited for the topic of this play and the chance to explore other aspects of Jewish history and community, I can't help but be incredibly disappointed that Two Jews Walk into a War. . . manages to only retread oft-explored grounds, and fails to even do so in a unique or particularly insightful way. Even putting that level of disappointment aside, the weak production elements and inconsistent tone make for a production that's far below the standards I'd expect from Theater J."

"...Immerwahr, Olinick, and Smith deliver Rozins comedy perfectly, whether in the bawdy discussions of Jewish law, the escalating insults, or the slapstick violence choreographed by Cliff Williams III. Theres a wonderful bit of what could be called the comedy of virtuosity, as Smiths Ishaq mimes wrapping the tefillin, the leather straps and boxes containing scripture used in weekday morning prayers, because the Taliban stole those as well, as Zebylan looks on in disbelief, having substituted discarded bootstraps."

"...Adam Immerwahr's direction keeps the audience on their toes. Moving an audience from laughter immediately to a deeper concern for the fate of these two men is no easy feat. Immerwahr's theatrical timing and strategic blocking deftly help crystalize the play's more significant messages and funnier moments."