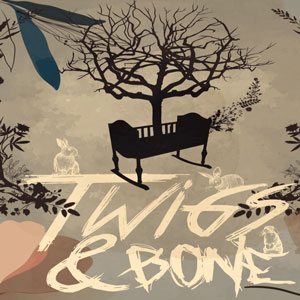 "...Spears is not just an actor and director, but an actors director who elicits intense performances out of her castmates and herself: The stage blood and piss might be fake, but the sweat is real. This immersive production is so committed to the visceral naturalism of Antones script that I was often surprised that I did not detect the odors of rot and bodily fluids. In sticking with the plays naturalism, its hard to tell where her direction ends and assistant director Mundy Spears fight choreography begins."

"...Twigs & Bone is not the first play to put a make-believe baby on stage, but it may be the most hair-raising. This particular phantom infant, conceived by playwright Tiffany Antone, figures prominently and paranormally in a gothic family drama now premiering in a chillingly terrific Nu Sass production at Caos on F. Inside that minuscule gallery space, Nu Sass has squeezed genuine theatrical legerdemain and told a gripping ghost story that explodes in your brain."

"...This play wont be around forever and seating is limited. Make it a priority to treat yourself to brilliant acting and a memorable tale before Twigs & Bone is goneand with it, your chance to unlock its secrets."