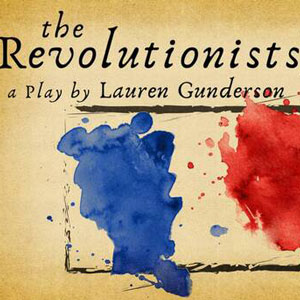 "...Corday may not have the rhetorical or analytical skills of de Gouges, or the political insights of the others: Her repeated motive for killing Marat is "because he's awful!" Gallo does not play her as goofy, as others have, but with a rage and resoluteness. She believes that taking the life of Marat, whom she regards as France's leading proponent for the Reign of Terror will save more lives, and is thus a patriotic act worth being executed for. Corday failed; Marat became a martyr, and the assassination was immortalized in paint by Jacques-Louis David, and on stage in Peter Weiss' Marat/Sade. The Terror continued until Maximillian Robespierre was ousted the following year."

"...At a time when constitutional rights, notably those of women, are under serious attack, it is a pleasure to see women with passion, conviction, and intellect stand up for what they believe in. Director Jessica Lefkow has created a highly entertaining production with an enduring message."

"...Like all of Gunderson's plays, "The Revolutionists" is original, literate, and challenging-and also quite funny. Director Jessica Lefkow has created a superlative staging of the show that overcomes the weak points in the script and that deserves to be seen."