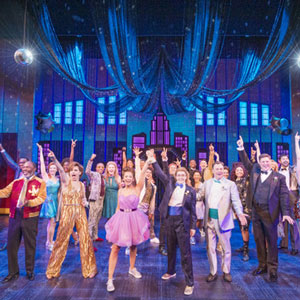 "...Considering "The Prom's" unusually swift stage-to-screen journey, the production now occupying the Eisenhower Theater feels undermined by the recency of Murphy's faithful take on the same story. Factor in the omicron variant, and it was sadly unsurprising to see swaths of empty seats at Wednesday night's performance, where the scattered crowd sapped some of the energy from director and choreographer Casey Nicholaw's high-octane staging."

"...The national touring production of The Prom now playing at the Kennedy Center is hilarious and touching. A relatively new musical, The Prom opened on Broadway in 2018, won the Drama Desk Award for Outstanding Musical in 2019, and in 2020 was adapted into a Netflix movie starring Meryl Streep, James Corden, and Nicole Kidman. Jack Viertel came up with the original concept for the show, with music by Matthew Sklar, lyrics by Chad Beguelin, and a book by Bob Martin and Beguelin."

"...The characters and situations-initially drawn with broad, glittering strokes-are gradually filled in as the Broadway interlopers warm to the town, and the town to them. Dee Dee is charmed by the school's principal, Mr. Hawkins (Sinclair Mitchell), a major fan of her work who encourages her to be just a tad more self-aware. Barry, played with delightful aplomb by Patrick Wetzel, takes Emma under his wing after learning that her parents kicked her out of the house after she came out to them. Buoyed by the support, Emma finds her own voice, leading to a feel-good ending for everyone."