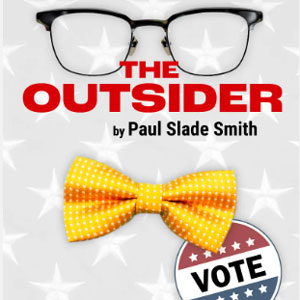 "...The Outsider by Paul Slade Smith, now playing at the Keegan Theatre, is a skewering send-up of all the shenanigans that polls, pollsters, and the media are involved in. Laughs aplenty ensue as a governor must resign and a decidedly "outsider" type of candidate, Ned Newley (played by a perfectly cast Zach Brewster-Geisz), is thrust into the spotlight without any of the political and media-savvy intuition that politicos believe are so necessary to appeal to the voters. Soon the tables are turned, and the outsider becomes the darling of the media due to his unerring honesty and complete lack of guile."

"...The Outsider is set entirely inside, in one room, or the spacious office to be exact, of the governor of an unnamed state. Freshly resigned as the result of a scandal that sounds quaint by Trump-era standards-a consensual extramarital affair!-our recent ex-governor is never heard from, though his impressively blank visage stares out at us from an official portrait above his desk. My congratulations to the suitably imperious-looking model for the painting, whomever he is."

"...Everyones performance works. And they all look like they are having as good a time as the audience is. Rebecca Ballinger is the shackled and manipulated (though elegantly, expensively, tastefully, and calculatedly dressed) journalist Rachel Parsons, who is harnessed with cameraman A.C. Peterson (Kevin Adams), who functions as an inarticulate (until he chooses to speak) representative of the economically depressed red-state masses. You just know he keeps his MAGA hat out of sight when hes on a job. Both of them are a delight to watch."

"...The Outsider by Paul Slade Smith feels unstuck in time. First performed in 2015, the politics of this agreeable, light satire are those of 2008, and the tone and style evoke smart sitcoms of the mid-1970s. While I enjoyed it, I came away wondering why the Keegan chose to open its season with this show at this time."