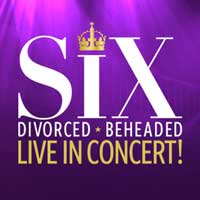 "...The brilliant and gladdening Six: The Musical thumbs its fetching nose at Tudor Englands old boys network and reserves a few blissfully scornful finger-wags for our own."

"...Billed as "an exuberant celebration of 21st-century girl power," SIX offers a retelling of that particularly sordid chapter from history with a focus on the women, their stories, and their fates - all sympathetically viewed from a thoroughly modern and feminist vantage point."

"...Six royally "screwed-over" women have revenge on their minds as they sing of empowerment and defiance in this "her-story" wherein the conventional narrative is reframed and explored. As the lyrics proclaim "Divorced. Beheaded. Died. Divorced. Beheaded, Survived" --- the factual fates of these well-known (and some not so well-known) royal women from history are given a chance to breathe in the sassy, sexual and supercharged/heightened world of a hyped-up pop concert. Each of the six royal wives) sing a specific song tailored to their own personas."

"...It takes a diva to be a queen. Henry VIII should know. He married six times, making six women queens. The electrifying musical Six turns history on its head to give bold voice to herstory in this fast-paced romp through the Tudor court. Backed by a pumping four-piece all-female rock band appropriately named The Ladies in Waiting (is that Greensleeves I hear on synthesizer?), Six leans into the pop princess phenomenon with a heavy dose of girl power positivity. Enough, in fact, to leave the audience screaming for more. The only thing missing at the breathless curtain call was phone lights begging for an encore."

"...The show has a strong following  the kind that feel its OK to sing along with the actors onstage. But its also appealing to history buffs and old-fashioned musical theater fans alike. Six is a crowd pleaser and deservedly so."

"...SIX makes its DC debut with flying colors. The entire company brought magic, energy, modernity, and fun to the stage with a cast of queens that we all should hail."