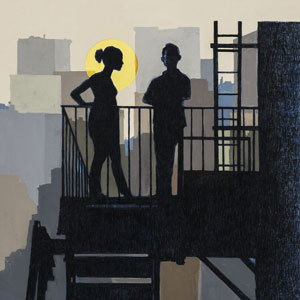 "...It's to Majok's credit that the central relationship is strong enough that the broader barriers these characters must traverse - of xenophobia, classism and American bureaucracy - often read more like accessories than the story's foundation. But by the end, "Sanctuary City's" blueprint is clear: Majok is here to comment on undocumented immigrants' strife, and put human faces to the ways in which the American Dream can slip into a nightmare."

"...A humane indictment of this countrys broken, bedeviled immigration system, Sanctuary City, by Pulitzer-winner Martyna Majok, asks pertinent questions about whos afforded which rights and privileges in the United States."

"...The show came here with the same trio of actors and set. Unfortunately, director David Mendizabal left his Associate Director Cara Hinh to handle the staging for this cross-country transfer. To be fair, Berkeley Rep's stage is closer to the Kogod Cradle with the audience on top of the action so maybe that would have helped matters but Hinh somehow managed to take all the tension out of Majok's script. That is not an easy fete. The big scene between the three characters toward the end of the show throttled you out west but here it just seemed flat as if Hinh forgot she had to play the show to the balcony of the Kreeger."

"...Martyna Majok's Sanctuary City pulls no punches. From this powerful drama's first moments, we are plunged headlong into the traumas that inflect the daily lives of undocumented immigrants. For Majok's two teenage protagonists living in post-9/11 Newark, the situation is especially harrowing. Their countries of origin are the stuff of myth: the U.S. is the only home they have ever known."

"...With just three actors, "Sanctuary City" spellbinds in its no-punches-pulled, one-act drama. A compelling argument for immigration reform, it makes visible struggles that were too long hidden from the public eye. The hopelessness and desperation in Majok's script makes this heavy viewing, but the tight pacing will hold you on the edge of your seat. Here's hoping policymakers make their way to Arena Stage for this production."