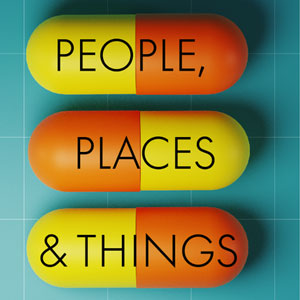 "...If anything keeps one involved in this rather familiar dramatic setup, it's the almost clinical unraveling of Emma's pathology, the sense that we're in it with Emma as she bamboozles the counselors in a British rehab center and undermines the other addicts. She's one cagey junkie. Macmillan - who in 2011 premiered another of his works, "Lungs," at Studio - takes us deep into territory that has been amply covered before, in feature films, TV series, daytime self-help shows and in-depth newspaper articles."

"...In Kristen Bushs tremendous performance leading the exhilarating production David Muse has staged inside Studios new Victor Shargai Theatre, we can detect the pride Emma takes in being a world-class addict."

"...People, Places and Things are a constant trigger for addiction and anxiety in the probing and intellectually thrilling production of People, Places & Things now playing at the Studio Theatre. A highly evolved play of substance that really pushes the boundaries of the subject of addiction is a top-notch tour de force courtesy of a very trenchantly observed and written play by Duncan MacMillan, above par technical elements, and excellent acting."

"...Director David Muse confidently brings together the naturalistic and hallucinatory elements of Macmillan's play. On one level, Emma finds her way to a rehab center and gradually accepts that she needs to stop isolating herself and participate in a therapy group. On another, she contends internally with alternate images of herself (played by cast members in look-alike costumes and wigs) and her mental images are projected onto the walls of the set."

"...Whether the play itself is a trigger will be an individual matter that one may not know till one sees it. (Be advised that just before intermission, Emma, totally wrecked, jovially invites everyone, the audience included, Lets all just have a drink.) But of this much, you can be certain: If you do decide to see People, Places & Things, which I highly recommend, you will not soon shake Kristen Bushs tour de force performance. And so indelible will you find her identification as an artist with the character of Emma that you will hope they will be okay  one day at a time."

"...In Macmillans superbly written and aptly named work (the title references a recovery slogan about triggers and relapse), the English playwright takes a lucid and, at turns, funny and mordantly perceptive look into the misery of addiction and the vicissitudes of recovery. At the center of his work is Emma  dishonest, witty, very toxic, but in spite of everything, likeable."

"...Kristen Bush delivers a searing performance as Emma, a brash and intelligent woman who thinks she can use her acting skills and wit to skate through an inpatient recovery program and get the certification she needs to return to her acting work. Emma armors herself with both hostility and humor to keep the people trying to treat her from getting too close to her trauma. Bush is in every scene of the play, and must exude intensity and vulnerability throughout. It is a superlative performance."