On Your Feet! En espanol Reviews 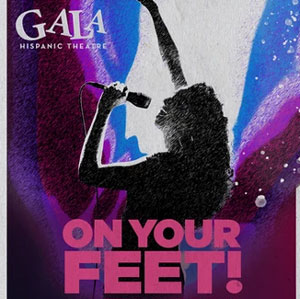 On Your Feet! En espanol

"...Seven years after On Your Feet! first conga-ed its way to Broadway, the Gloria and Emilio Estefan jukebox musical has arrived at GALA Hispanic Theatre for a vibrant Spanish-language premiere that plays not like a reinvention but rather the staging that was always intended."

"...Whether you approach On Your Feet! The Story of Emilio and Gloria Estefan as the inspiring immigrant journey of one of America's true power couples, or merely enjoy it as a jukebox musical celebration of beloved entertainers, the rhythm is gonna get you."

"...On Your Feet! celebrates Cuban-American pride and the need to celebrate life during both the good times and the tough times. This fascinating real-life story of Gloria Estefan and Emilio Estefan is full of bite, vigor, and vibrating energy to touch the soul and the heart. A multicultural cast lends their voices and hearts to portray what it means to be the face of America and to strive and reach the American Dream."

"...A surge of barely contained excitement washed over the audience as those first few iconic notes of Rhythm Is Gonna Get You blared to life. When Gaby Albo took the stage, it was as if we were watching Gloria Estefan, the legend herself, perform. Albos electrifying presence filled the room as her energetic performance perfectly set the tone for what would be the next two hours of captivating performances and cathartic storytelling."