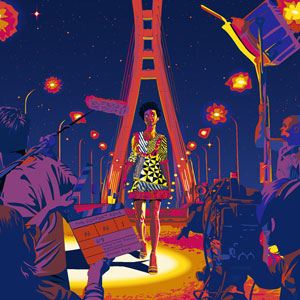 "...Blessed with a cast that seems positively delighted to indulge in risible stage mischief, director Raymond O. Caldwell works the levers of Biohs satire with rewarding dexterity. Chief among his gifted players are Ernaisja Curry and Renea S. Brown as show-business-obsessed sisters, and Jacqueline Youm as a supercharged Lagos TV talk show host so brimming with enthusiasm that she out-Oprahs Oprah. This is not to slight Yao Dogbe, Yetunde Felix-Ukwu and Joel Ashur, all of whom provide giddy portraits of the sleazy manipulation, craven desperation and boundless self-regard inherent in an industry of vanity everlasting."

"..."Nollywood Dreams" boasts a remarkable set by Jonathan Dahm Robertson, with big, wooden HOLLYWOOD style lettering above, and a turntable stage that switches from travel agency, to daytime TV set to film office. All that ambition can trip you up, though, and early on during opening night, the stage refused to move because of an electrical "brownout.""

"...The six actors bring their characters to life as both individuals and as parts of a well-matched ensemble. The high points include moments when Brown's enthusiasm overwhelms her reserve, Curry's hilarious acting prep routine, and Dogbe's surface slickness."

"...When a random jingle from a play you saw recently lodges itself in your head for the 48 hours that have passed since seeing said play, chances are thats because the tune either is incredibly annoying or feels somehow just right. In the case of Nollywood Dreams, a lovely comedy headlining at Round House Theatre, its the latter. Largely because the song cuts straight to the heart of the play, I have not been able to stop singing Adenikeh! Bringing love into your home since I walked out of the theater."

"...Six actors are in the cast of Nollywood Dreams. I found all of their characters believable. Joel Ashur is Wale Owusu, the movie star hunk with a receptive heart. Renea S. Brown portrays Dede Okafor, making fun of her sister Ayammas dreams. Ernaisja Curry is Ayamma who never gives up on seeing herself on film. Jacqueline Youm is Adenikeh, an over-the-top talk show host who loves the adoration from her guests and audience. Yao Dogbe is Gbenga Ezie, the filmmaker with a questionable background, and Yetunde Felis-Ukwu plays Fayola Ogunieye, a veteran film actress who wants to keep her career going."

"..."Nollywood Dreams," which benefits from assured direction by Raymond O. Caldwell, is just a simple, cheerful, uplifting show. It has no pretensions beyond that, and that's a very good thing. Sometimes we all just want a Hollywood ending-or a Nollywood one."