My Children! My Africa! Reviews 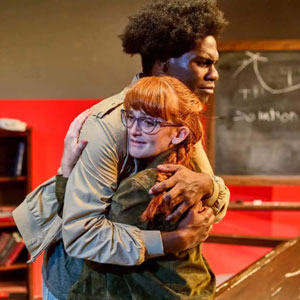 My Children! My Africa!

"...But its what Mr. M says that has particular resonance, especially when hes confessing how hard it is to hope in a world of division and systemic injustice. The power of language and discussion, as opposed to violence, is another of his beliefs. He tells Thami, who is tempted by militant activism: If the struggle needs weapons, give it words."

"...The three-character drama plays out in the simple classroom of an all-Black high school in a segregated township. Thami, a highly promising Black student, has a spirited debate over women's rights with a visiting white student, Isabel. Thami's teacher, Mr. M, an old-school pedagogue who believes passionately in the power of words to uplift members of his race, encourages the pair to team up and enter a competitive quiz on English literature. Not only would it serve as a sterling example of interracial cooperation, if they win; the prize money may enable Thami to attend college."

"...Act One is slightly stately in it's pacing and length. But Act Two brings the heat and the storm and ratchets up the tensions in these three characters' lives and, by proxy, in the wider world. The parallel to our current social unrest and divisions in this country is frighteningly relevant. This production of "My Children! My Africa!" is well worth seeing, discussing, and taking those lessons to heart."