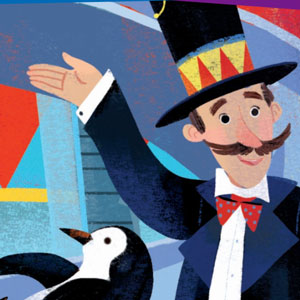 "...Singing the songs of George Howe in Robert Kauzlaric's adaptation of the beloved children's book by Richard and Florence Atwater, the four would be more than enough to entertain a theater of families."

"...This musical feels grown-up and classic while still being enjoyable for the young audience members. There are several time-period slang words used, like zowie, hotsy-totsy, and swell. The Works Progress Administration (WPA) is mentioned, but not explained, and though adults and older children might know this is the Great Depression, younger ones most likely will not. But the financial strain and stress are clear regardless. My own son whispered to me his idea for how the Poppers could make money early on in the performance; he was genuinely concerned about the characters welfare, which means the entire cast and crew have triumphed."

"...If you need a show to make you smile, this is the show to see this summer. Chill out with Mr. Poppers Penguins and enjoy a family-friendly, charming, and uplifting story with captivating props and performances."