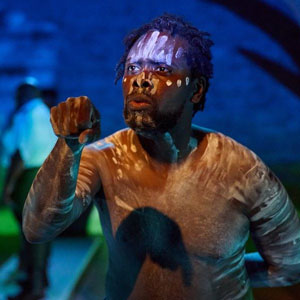 "...It's easy to assume that Mlima is going to be played by a puppet, but that isn't the case. An actor plays Mlima, which humanizes the elephant and provides deeper meaning to the play. The extremely talented Jeremy Keith Hunter plays Mlima with such passion and grace. Even after Mlima's death, Hunter remains a haunting presence on stage as he witnesses the illegal exchange of his tusks from the spirit world. When Mlima is happy, we feel his energy. When Mlima cries, we feel his grief."

"...Mlimas Tale is the opposite of social realism. One could call it poetic, which it often is. But it is even more like a dreaming, an exorcism, a cleansing. It feels like a ritual that is almost hypnotic and trance-inducing in the rhythms of its language. It summons up the connections  invisible and across long distances  to spirits, ancestors, and the land."

"...Mlimas Tale at 1st Stage is executed well by the company members, director, and set design. The show is worth seeing if you are interested in animal rights and the poaching industry or if you want to experience another important play by a two-time Pulitzer Prize of Drama winner, Lynn Nottage."