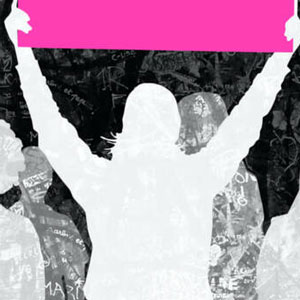 "...An abortion rights rally has erupted in Dublin, and its sights and sounds are everywhere: an impassioned hand-inked protest sign; a demonstrators face, etched with rage; the noise of an agitated crowd. But the vivid depiction of activism is just one eloquent element in Irish playwright Eva OConnors character-rich two-hander Maz & Bricks."

"...Fiery, sharp, timely. Those are the words that first come to my mind after attending Solas Nua's production of Maz and Bricks. As a woman it is easily one of the most relatable pieces of theater in DC right now and the production seems to draw on the very energy of the protests taking place just down the street."

"...Maz and Bricks deals frankly with abortion, a sensitive subject for many, especially now (see Solas Nuas Maz and Bricks and the war on abortion rights). In the middle of a pandemic and a divided nation, it would be easy for a theater to concentrate on entertainment and avoid difficult subjects. Solas Nua has not made this choice. In presenting Maz and Bricks, they shine a light on an issue that will probably become critical for some Americans and deadly for others. And they have brought us a theatrical gem."

"...When choosing from the regions vast theatrical offerings this summer, theatre fans should make seeing this production a priority before Maz & Bricks wander back into the crowded streets of Dublin and disappear forever."