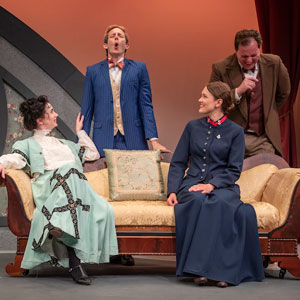 "...The Washington Stage Guild's current production of Shaw's Major Barbara, given a solid staging here under the able directorship of Steven Carpenter, runs rings around a whole world of ideas, metaphysical, physical, you name it-with the odd reference here and there to the study of Greek (which Shaw, apparently, loves to diss. Being a Greek scholar, I take exception-but back to the matter at hand...)."

"...The wit of Bernard Shaw (as he preferred to be called) is on dazzling display at the Washington Stage Guild. Director Steven Carpenter and his talented cast bring us a beguiling and highly nuanced version of one of Shaw's finest plays."