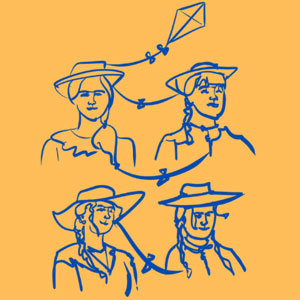 "...Charlotte La Nasa's direction along with Elisa Rosman's musical direction of this musical transports audiences to the modest home of the March sisters. NextStop's Little Women is candid, humble, and charming, exactly what this story needs. La Nasa's direction focuses not on bells and whistles but rather on the raw and real connection between these four sisters. Rosman's musical direction follows this same trend with a very simple orchestration of just two pianos. This production is realistic, letting audiences study the March women, their unembellished lives, and their grand dreams."

"...I had the good fortune of seeing NextStop Theatre Companys Little Women. The musical, based on Louise May Alcotts beloved semi-autobiographical classic, follows the four March sisters in the 1860s. With a father away, serving as a chaplain in the Civil War, the sisters and their mother do their best to stay positive and happy, with very little wealth but endless imagination."

"...Two pianos sit under a simple, wooden, A-frame house, lit by the yellow glow of string bulb lights, settling the audience into the life of the March household during the Civil War. Louisa May Alcott's esteemed novel, "Little Women," has taken on many forms, including seven movie adaptations, eight television renditions, three audio dramas, and, of course, the Broadway musical adaptation which has made its way to NextStop Theatre Company's stage."