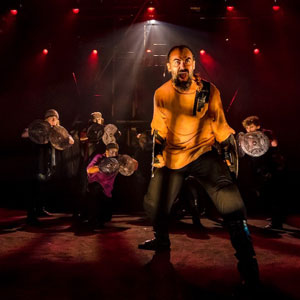 "...Its ironic that in Synetic Theaters revival of its 2002 work Host and Guest a movement-rich rebuke of humankinds propensity for violence and hatred  the most compelling moments evoke such inclinations. The dialogue can sound stiff in this tale of warring clans and courageous loyalty; scenes of mourning can feel ponderous. Yet in agile, fast-paced, ingeniously choreographed sequences, slaughter and vengeance shimmer into life."

"...The cast of Host & Guest are graceful and powerful within their movements. The stylized choreography of Irina Tsikurishvili and the acrobatic fights choreographed by Vato Tsikurishvili blend together, creating a cycle of unity and rivalry. This is where Synetic is at its strongest with its focus on storytelling through movement. The smooth and rapid movements of choreography reflect the style of Georgian traditional dances. When this is paired with Phil Charlwood's set design (remounted from the original by Gogi Alexi Meskhishvili) and hypnotic original music by resident composer Koki Lortkipanidze, the play proves to be both visually stunning in its message of camaraderie."

"...The play, adapted by Roland L. Reed from the poem, is an examination of the clash between individual acts of hospitality and the power of cultural hatred, but that description ignores the pulsating physicality that dominates the 90-minute work. Unlike many of Synetic's other dramatic pieces, this one has dialogue, but the Tsikurishvilis (Paata as director, Irena as choreographer) convey the story's power through the company's signature feats of extreme movement."

"...An act of kindness from one stranger to another turns into a night of tragedy and bloodshed as the prejudice, hatred, and strife of warring communities blind their eyes to a shared humanity in Host & Guest at Synetic Theater. A play by Roland L. Reed, based on Vazha Pshavelas narrative poem Host and Guest and directed by Paata Tsikurishvili, this season opener is an arresting reminder of the painful blows we can deal one another and a sobering exploration of the danger leaders who raise armies fevered with righteousness in the destruction of an unknown other can pose."

"...With apologies to T.S. Eliot, Synetic Theater opened its 20th season with a big bang actually two bangsand closed Host & Guest to an even bigger bang. Throughout the 90-minute production, the movement was brilliant, the energy, fierce and unrelenting, as the theme of wars futilitywith brother fighting brotherunfolded in a spectacular production that deserves to be seen by our world leaders. Before that explosive opening, director Paata Tsikurishvili bounded onto the stage to welcome the audience and acknowledge his many supporters."