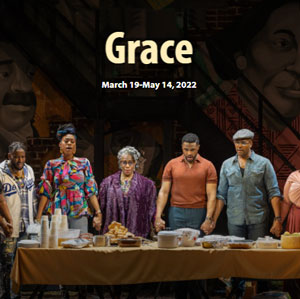 "...Williams' score ventures through stage musical interpretations of a myriad of genres, including the aforementioned gospel and jazz, along with blues, R&B, and a soupçon of hip-hop, repped by Rayshun Lamarr's social media-savvy DJ cousin Joshua. The show weaves intergenerational connections through the music and the script, which tends towards sitcom patness, but still strikes chords of realness."

"...Billed as the "New Musical", the musical Grace is a soulful and heart-filled affirmation of a family hanging on to hope and love as their community changes and as the future propels them onwards. This new musical now playing at Ford's Theatre is also about letting go of the past yet still honoring it while hanging in with grit and endurance. Grace is shot through with musical numbers that grab you by the gut (gloriously eclectic music and lyrics by Nolan Williams, Jr.) and a superb cast of talent that knocks this out of the park vocally and with finely-honed acting chops."

"...Ford's Theatre in Washington is hosting the world premiere of Grace, a warm and rousing, if overly crowded, musical that tells the story of one African-American family's historical and culinary traditions. Director and choreographer Robert Barry Fleming, working with a powerful cast, has served up a rich stew that sometimes becomes too complicated for its own good."

"...Nolan Williams, Jr.s music and the lyrics were surprising in many ways. The melodies in which the lyrics are suspended were consistently arresting. The actors seemed to luxuriate in the lyrics. It was a joy to watch them enjoying themselves."

"...Nimbly staged by Robert Barry Fleming, the 90-minute without intermission production moves at an enjoyably brisk pace. In addition to Payton, the cast boasts seven other talented actors, all with marvelous voices and able to effectively play both the light and poignant moments."

"...Despite being a tale as old as time, Grace has its merits, not to mention a powerhouse of talent on the stage. Although it clocks in at just over 90 minutes, a little bit of tightening and tweaking could make it a powerhouse of a show.'