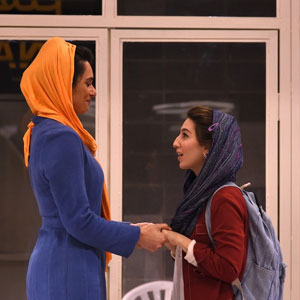 "...Adams's superlative cast nimbly navigates the performance guidelines that Toossi requires: They converse in fluent American English when they speak in their native tongue, Farsi, and shift to accents of varying levels of clarity when demonstrating their skills with English. (The fastest learner is the youngest student; the oldest has the greatest struggle.) Grammy's rewardingly bristly Elham is the class rebel, defying Marjan's entreaties to leave Farsi outside the room; her blunt outbursts belie her insecurities. In Ebrahimzadeh's sensitively assembled portrayal, Omid's colloquial mastery raises suspicions that he's unwilling to quell - and, of course, intensifies his attractiveness to Marjan."

"...This delicate play might not be for all tastes, but it will definitely be rewarding for those who want to seek out the unusual and allusive in their theatrical fare. The Studio Theatre's production of English is an illuminating look into the language of linguistics and human connection."

"...Toossi's play, which shines in its illumination of small moments, is a snug fit in the intimate Milton Theatre. The year is 2009, when the Iranian public found hope that the presidential campaign of a reformist candidate might loosen the conservative rule that had come to power in the 1979 revolution. Iranian citizens need to pass the Test of English as a Foreign Language (TOEFL) before they can leave the country; the teacher, Marjan (Nazanin Nour), has returned to the city of Karaj after nine years in England."

"...Written by in-demand playwright Sanaz Toossi and directed by Knud Adams ⁠(who also directed the original New York production last year), English centers on four students studying for the Test of English as a Foreign Language, or TOEFL, in Karaj, Iran, in 2009. Their specific reasons for taking the test vary. Elham (Tara Grammy) needs a high score to go to medical school in Australia. Roya (Nina Ameri) would like to live with her son and granddaughter in Canada. Omid (Maboud Ebrahimzadeh) says he wants a green card so he can move to the U.S. For all, learning English is the key to their next step in life."

"...The directorial choices by Knud Adams are smart and engaging for the audience. The play is predominately in English but gives the impression that the characters are speaking Farsi. The actors manipulate the rhythm of their words as if they are switching between the two languages. Their execution of this technique is flawless and beautiful, as well as being easy for the audience to understand which language is being spoken. The rhythm also insinuates how learning a new language can be both fun and frustrating for students. The characters' mistakes and approaches to learning through repetitive vocal exercises and playing games are playful and entertaining. Overall, the production of "English" at Studio Theatre is an incredible display of how language and identity are connected and is highly recommended."