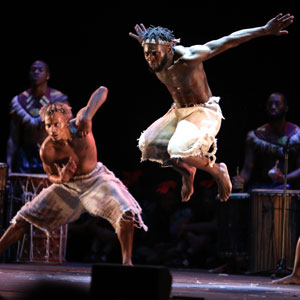 "...Drumfolk, the latest polyrhythmic percussive dance production by Step Afrika! is unquestionably great art. Drumfolk, which opened this week at Arena Stage, marks the beginning of a multi-year partnership between the two groups that will have Step Afrika! in residence at the Fichlander for at least three years."`

"...Step Afrika!'s latest production, Drumfolk, just opened at Arena Stage, and as always, the dancing is fiery and superbly executed. More important, the production's whole reason for being tells a story that not enough people have heard, about two events in American history that happened not so long ago."

"...Drumfolk is a triumph, plain and simple. A showcase of dance and history, this production is the first of a multi-year partnership between Step Afrika!, the first professional stepping dance company, and Arena Stage. Stepping, a percussive style of dance featuring clapping and stomping, flourished during the 20th century in the historically African-American fraternities and sororities of the National Pan-Hellenic Council, also called the Divine Nine, but has even earlier roots. Drawing on this tradition, Drumfolk celebrates the resistance and resiliency of enslaved people and their descendants through a moment of history in colonial South Carolina."