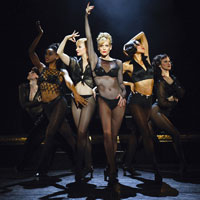 "...It is no secret why the musical Chicago, now playing at The National Theatre, is such a long-running hit lauded by the public and critics alike. It is the ultimate in cynical musicals and will be applauded as long as "the world goes round" with avarice, immorality, and greed."

"...Kander and Ebb's Chicago is one of those timeless shows that falls under the category of: "If it ain't broke, don't fix it." Originally directed and choreographed by Bob Fosse, Chicago opened on Broadway in 1975. Now the show's 1996 revival is celebrating its 25th year running, maintaining direction by Walter Bobbie, and Fosse-inspired choreography by Ann Reinking. And the production is as splendiferous as ever."

"..."Chicago" is now playing at National Theatre in the 25th Anniversary Tour of the 1996 Broadway revival. While I was deeply impressed with the phenomenal dancers and vocalists, I was left longing for more overall razzle-dazzle in the show as a whole."