Beauty and the Beast Reviews 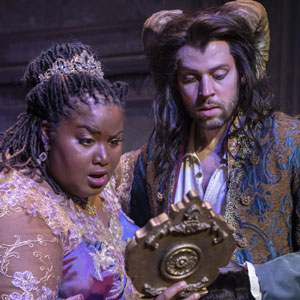 Beauty and the Beast

"...Olney Theatre Center's production of Disney's Beauty and the Beast is a brilliant reimagination of the classic we fell in love with. Led by Jade Jones (Belle) and Evan Ruggiero (Beast), we are provided a fresh and transformative performance that gives a new meaning to the story's phrase: "beauty is found within." It seems as though this is always how the story should've been told."

"...Olney Theatre Center proudly presents its revival of Disneys Beauty and the Beast, with music by Alan Menken, lyrics by Howard Ashman and Time Rice, and book by Linda Woolverton. COVID forced the production to shut down early last season, but not before the show garnered national and critical acclaim. Director Marcia Milgrom Dodge leads a groundbreaking cast built on inclusivity, with Walter Bobby McCoy as musical director for the iconic score."

"...The team at Olney Theatre will give you a show that is both familiar and fresh and, above all, fantastical and fun. Disneys Beauty and the Beast is loved by all ages from parents who took their kids to see the film when it was released; to those who grew up with the movie; and kids now who love the Disney version. It is a great way to introduce children to a story that teaches and reminds them that true beauty is not about what is on the outside, but what is on the inside."