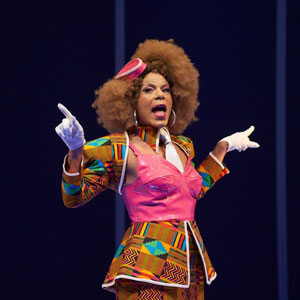 "...Aint No Mo  originated at New Yorks Public Theater in 2019, and that Stevie Walker-Webb-directed production is headed to Broadway this fall with filmmaker Lee Daniels as a producer. In the Woolly version, mounted in association with Baltimore Center Stage, the sketch-show-like format lands in the capable hands of director Lili-Anne Brown. The onetime Second City performer succeeds by giving Odom  whose ferociously flippant Peaches is the plays emcee of sorts  and a chameleonic five-actor ensemble free rein to play up Coopers incisive material."

"...Cooper's script balances ensembles with solos; each performer has more than one moment. Breon Arzell, boundlessly energetic as the over the top preacher leading the raucous funeral for Right to Complain or the MC of television's "The Real Baby Mamas of the South Side," performs a pas de deux with a Little Richard wig and then a Mikado-grade fan. LaNisa Frederick brings a moving range of emotions to a realistic scene in which a prisoner has trouble accepting the fact of her freedom after 15 years of incarceration."

"...The overall vibe of Cooper's writing, matched by Brown's direction, is over-the-top laughs (the sweet coating) with a bitter center. The opening scene, set immediately following Obama's election, is a farcical "funeral" for "Brother Right to Complain." Now that a Black man is president, a minister in a sequin-trimmed suit (Breon Arzell) says Black people won't need to complain about their treatment in the U.S. because the president is one of them. (He uses an earthier term for Obama, and he uses it repeatedly.)"

"...Aint No Mo is at its core a satire built upon the Black American experience. The play by Jordan E. Cooper, which primarily takes place in a nebulous any day now, is broken into several scenes, all tying back to the imagined mass exodus of African Americans from the United States on African American Airlines final departure to Africa, Flight 1619. Following the monumental election of former President Barack Obama and the hilarious yet reverent funeral of Mr. Right to Complain, the show continues as it simultaneously depicts Peaches readying for the flight between scenes of various passengers reactions and preparations."

"...The play Aint No Mo made its world premiere at The Public Theatre (NYC) in 2019. Ahead of its Broadway debut this November, Jordan E. Coopers critically-acclaimed, new comedy is making its regional premiere at Woolly Mammoth. It brilliantly blends sketch, satire, avant-garde theater, and a dose of drag, while asking the question, What if the U.S. government offered Black Americans one-way plane tickets to Africa?"

"...Its difficult for a show to take on the weight of 400 years of history and also be laugh-out-loud funny, but thats exactly what playwright Jordan E. Cooper accomplishes with Aint No Mo. After an acclaimed 2019 run at The Public Theatre, the play is currently having its regional theatre debut at Washington D.C.s Woolly Mammoth Theatre. A Broadway production of the show, featuring Cooper as a performer, is scheduled for later this fall. If this D.C. production is any indication, Aint No Mo ought to have a successful life on Broadway and beyond. Coopers play is the rare satirical work that feels as affirming as it does biting, as joyful as it is discomforting."